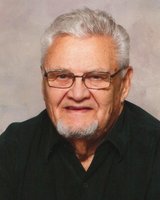 Tom was born on February 20, 1938, in St. Catharines, Ontario to Ellen and Lawrence Peat. Tom went to high school at Merritton High School. Tom worked at the St. Lawrence Seaway as a diver and then supervisor until retiring in 1992. Tom was a “Port Boy” and was a member of the Port Dalhousie Legion and a volunteer fire fighter for many years. Tom enjoyed spending time with family and friends…and of course, golfing.

Cherished husband of Barbara Peat for 64 years. Tom is survived by his wife Barbara, his children Steve (Tanya), Dianne (Fred), Mark (Tracy), Tom (Carol) and Chris (Jane) and many grandchildren and great grandchildren, his sister Diane, his brother Brian, his brother-in-law, Rick and many nieces and nephews. He is preceded in death by his parents, Ellen and Lawrence, his sister Margaret, his brother-in-laws, Ole, Jens and Norm and his grand daughter, Amanda.

The family wishes to thank each and everyone for your prayers, and the numerous ways of support we received during this difficult time.  A sincere thankyou to the United Mennonite Home for all your continuous care and compassion. You took such good care of Tom and we can’t thank you enough.

A celebration of life will be announced at a later date. Memorial donations may be made to the charity of your choice.