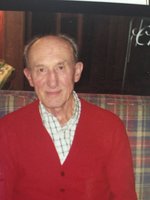 Predeceased by his parents, sister Mary Sawatsky and brother Harry Friesen. Peter is now reunited with his beloved wife Lois (1969).

Peter was born near Steinbach, Manitoba to Peter and Helena (Penner) Friesen on December 6, 1927 and moved to the Vineland area as a young boy with his family. In his youth, he was athletic and enjoyed playing hockey and baseball. Later years were spent following his grandsons in their sporting activities. Peter enjoyed golf and bowling and traveling with Marion. He was a hard worker in the tool and die trade first with Columbus McKinnon and then with TRW.

The early death of his beloved wife affected Peter greatly, but he never complained and in his quiet way lovingly raised his two young daughters and carried on as best he could. He was a wonderful father and Debbie and Pamala will miss him very much.

The family is very thankful to Dr. Woodland and staff at the Home for their compassionate care in Peter’s last days. Due to Covid restrictions, there will be no visitation and a private graveside service will be held.

If desired, memorial donations may be made to Mennonite Central Committee (MCC) or the United Mennonite Home.