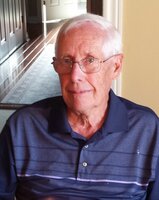 Victor Franz was 88 years old when he died peacefully in his home in Virgil, Ontario on September 23, 2021, with his wife Sally, wife of 61 years, by his side. He was born in Paulsheim, Ukraine, a Mennonite Colony on June 13, 1933.

In his early years, Vic, his mother, and his sisters fled their home during the second world war as refugees. In their search for safety through war-torn Europe to Germany, they experienced many life-threatening situations, hunger and homelessness. Only because of God’s mercy and protection did they arrive in Berlin in 1946. From there, they were accepted as refugees in Paraguay, the only country to accept those refugees at that time. In 1947, they began to carve out their life in a new country by clearing land in the jungle. During that time, Vic apprenticed as a carpenter, gaining skills he would continue to develop and use for a lifetime.

Vic, together with his mother and sister Selma, were able to immigrate to Canada in 1955. He quickly found opportunities to use his skills doing finish carpentry in new home construction. He learned to do very high-quality work very efficiently and as a result, was able to quickly save enough money to build a small house for his mother in Virgil.

Soon after, he attended Mennonite Brethren Bible school in Kitchener, his first opportunity to gain formal education since Grade 3, and gain a deeper foundation for his Christian faith. While at school, Vic met his future wife, Sally, and they were married in July 1960. After this, he completed his high school equivalency, preparing the way for post-secondary studies.

Vic yearned for more interaction with people and chose to enter the teaching profession. He accepted his first job teaching wood technology in Essex, Ontario, moving the family, now with young children Carolyne and David, to Leamington. Three years later they moved back to Virgil and Vic began teaching wood construction technology at Grimsby Secondary School while concurrently completing a degree at Brock University.  He remained as a teacher in Grimsby for his career of 25 years where he was much loved, remembered fondly by former students for what they learned and how he personally impacted them.

Vic loved his family and generously provided for all those around him. He loved to gather family together and celebrate together around meals prepared by Sally. Vic and Sally prayed daily for their children and grandchildren, taking a keen interest in the details of their lives and encouraging them in all their endeavours. It was so important to him that they all have a living faith in Christ. Vic modelled expressing gratefulness and thankfulness to God in his prayers, even in his own pain and struggles.

Vic took on many side jobs doing various woodworking projects during his teaching career.  He set up a business and used it to employ Dave and Marv, teach his skills, and share his love of woodworking with them. Vic took on every project that came along - no matter how unusual or challenging. He built several houses, countless stairs and railings; many cabinets; horse-drawn carriages and kitchens and many other projects. He had an engineering mind and could fix anything. He spent countless hours in his workshop until he was no longer able in the spring of this year.

Growing and eating fruit and vegetables of all kinds was a hobby and love for Vic. He expressed such joy in cultivating gardens and fruit trees, buying fresh fruit whenever he had the chance. There was never a shortage of fruit in the house! Sally needed to preserve, bake and deal with the overflow that would often occur.

Everywhere he went, Vic loved to meet people. He regularly visited his neighbours and when he learned about their needs, he thought of ways to help them. Vic had a big heart for migrant workers and newcomers to Canada. Vic and Sally hosted foreign students, led neighbourhood Alpha Bible studies and weekly church small groups. Vic had a big heart for the people of Honduras and made eight trips there, leading building teams and supporting the orphanage in San Pedro Sula. Vic and Sally regularly prayed for their dear friends and partners in ministry there. Vic consistently encouraged his small group members in our church. They were blessed by his wisdom, discernment and prayers for them.

In his final weeks and days at home, Vic had the opportunity to visit with friends and family where he would continue to offer encouragement, sing hymns with family and receive words of love and appreciation.

Those wishing to make donations in Vic’s memory are invited to support King’s College Christian School in India (ministry of KATALYST World Partners).

Pre registration is required. Visitation will be from 6 to 8 pm on Monday, September 27th at Tallman Funeral Homes (3277, King St. Vineland.)   To register for visitaiton please follow this link. Visitation for Victor Franz.

The memorial service will take place on Tuesday, September 28 at 1:30 pm at Harvest Bible Chapel Niagara on 301 Scott Street, St. Catharines. It is a requirement to register ahead of time due to the capacity of the building. Please follow this link to register for the memorial service.  Victor Franz Memorial Service. Covid safety protocols will be followed including the wearing of masks during the service.

The memorial service will be livestreamed.  Please follow this link to view the livestream.  Victor Franz Livestream.