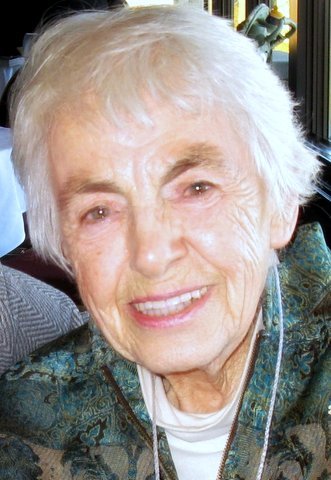 Katherine (Kay) Lorraine McKeever died on April 4, 2019, aged 94, at Albright Manor in Beamsville, Ontario, to which she had moved in August 2018 after years of declining health.

Kay was born in Vineland, Ontario, on October 16, 1924, the third child of Muriel and Roger Clarke, who took up fruit farming in Vineland Station at the end of the first World War. The family also lived in Ottawa in winter for Roger's work there, so Kay was schooled in Ottawa, Vineland and Beamsville. In her childhood, Kay loved the outdoors and climbing trees. She loved animals, domestic and wild, and learned about them from her father. In high school she excelled in athletics and English. She worked on the farm in summer and learned figure skating from her father in winter. She joined skating clubs and did exhibition skating.

Kay graduated from high school during World War II and enlisted in the Women's Division of the RCAF. She served in British Columbia drawing maps for pilots serving in the Pacific. She was very disappointed that at the time the RCAF did not allow women to fly planes, for that is what she wanted to do. While on service she met Robert Colbran who in 1945 became her first husband, but the marriage lasted only three years.

After the war, Kay used her mapping skills to get a job with Photographic Survey Corp. in Toronto. She joined a group that bought a war surplus airplane and eventually achieved her ambition of becoming a pilot. While at PSC, she met Don MacFadyen, who had been a flying instructor and night intruder pilot during the war, and was involved in forming a subsidiary of PSC to operate in South America. Kay and Don were married in 1950. They lived in Toronto and Brazil and visited other countries. They had two children. They collected rocks, minerals and gemstones and became friends with a couple who dealt in Brazilian gems. Kay designed settings for gems, and later sold gems and jewelry in Canada.

Kay returned to Canada in 1956 with the children while Don was still working in Brazil, and eventually bought a house in Richmond Hill. Kay carefully designed and built a large garden. Kay had an aptitude for art and design which she applied in many ways. She was also an avid reader and a fan of classical music. She returned to figure skating and had annual canoe trips with skating friends.

Kay's second marriage broke down in the early 1960s. She returned to her parents' home in Vineland. She travelled for several months in Europe with two friends and came back with a young Scottish Deerhound. Kay designed a house for herself on the bank of Twenty Mile Creek, beside her parent's home. She drew all the plans and helped to build it.

Kay designed homes for friends, producing detailed house plans and having them approved by an architect. In her new house Kay returned to her early love of wild animals. The dogs were joined by orphaned raccoons, flying squirrels, exotic owls, and the first orphaned wild owl.

Kay's mother introduced her to Larry McKeever, a widowed electrical engineer who had been a naturalist and conservationist for many years. They were married in 1967, and this time the marriage would last. They built a house in Peterborough that Kay designed, and they lived there for a few years until Larry's retirement. Kay became more serious about rehabilitation of injured birds of prey, and about conservation in general.

In 1970 they moved back to Kay's house in Vineland, and began a rapid expansion of raptor rehabilitation work. Kay became a pioneer in the care and rehabilitation of wild owls. Her total dedication to this work, the aviaries that she designed and Larry built, as well as the many contacts she made, led to increasing recognition of their work by other people.

Kay started speaking to groups about owls and her work using slide shows. Audiences found that she was not only an expert on owls but also a very entertaining speaker. She was soon in demand for meetings of many organizations. In 1975 Kay and Larry established a charitable organization (now called The Owl Foundation), so that they could offer receipts for the donations they received. Kay and Larry lived on his pension, and remained full-time, around-the-clock volunteers in their great project for decades. By their extraordinary commitment of time and labour, and later with the help of other volunteers and staff, they built an institution in which thousands of birds of prey have been helped and returned to the wild.

During the 1970s Kay found that given the right conditions, disabled wild owls that could not be returned to the wild would breed in captivity and produce young that could be trained and released. She also used disabled wild owls as foster parents for wild orphans. Kay became fascinated with the breeding behaviour of owls. She considered her success in breeding most of the species of owls native to Canada to be one of her most important achievements.

Kay wrote a manual on the care and rehabilitation of owls that was first published in 1979 and went through four editions. This manual brought professional interest in her work from around the world. Kay became a widely recognized authority on owls and their rehabilitation and breeding. She was invited to speak at conferences and to contribute to scientific and other publications. Kay also wrote two books for children based on true stories of owls in her care.

Kay was an inspiration to many people, and a friend and mentor to other rehabilitators. She had hundreds of contacts and received a vast amount of correspondence.

Kay and Larry were ardent advocates for nature conservation and were distressed at the loss of nature everywhere at human hands. In the 1980s they launched an ambitious ongoing woodland restoration project, planting native tree species on the land that once held the fruit farm of her parents, creating an oasis of nature in an agricultural landscape.

Kay and Larry received many awards from rehabilitation, veterinary, conservation and other organizations, too many to list here. Both received honourary Doctor of Laws degrees. Kay received the Lifetime Achievement Award of the U.S. National Wildlife Rehabilitators Association. She was made a member of the Order of Canada in 1986.

The last two decades of Kay's life were marred by tragedy and decline. Larry died in 2002, and in the same year, West Nile Virus hit the Niagara area, and killed many resident owls that were dear to Kay. She continued to work with owls into her 80s, but started to develop dementia, and then lost most of her vision, and declined physically. She had to let the staff and volunteers of the Owl Foundation continue the work that she and Larry had started. Kay lived in her home, the headquarters of the Owl Foundation, with daily home care from 2012 to 2018, surrounded by the cats and owls she loved, until she required more care.

Kay was predeceased by her husband Larry, sister Betty Crowther (d. 2018) and brother Donald Clarke (d. 1988). Kay is survived by her children Genevieve and Rod MacFadyen; by her step-children Sheila Legon and Derek McKeever and their families; by Betty's children Anne, Susan, Richard, and Margie, and Donald's children Gwen and Leith, and all their families.

A cremation has taken place, in accordance with Kay's wishes. A memorial service will take place at the Vineland Chapel of Tallman Funeral Homes on Friday, May 10 at 2:00 p.m.

Donations in memory of Kay may be sent to the Owl Foundation, 4117 21st Street, Vineland Station ON  L0R 2E0, Canada.