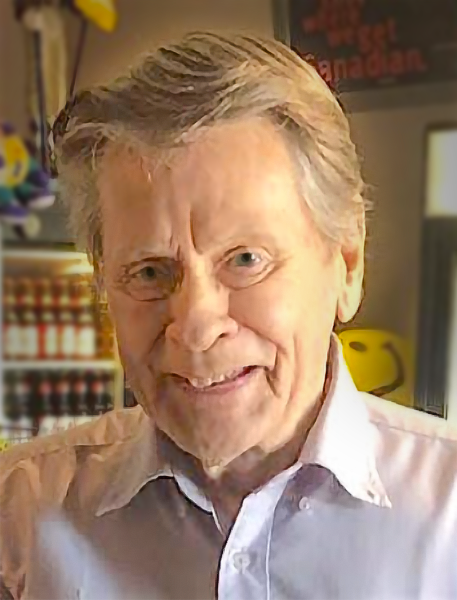 It is with profound sadness that we announce the passing of Jack Thomas on January 23, 2020, at the age of 88.  He was predeceased by Lynn, his beloved wife of over 59 years.  He is survived by his children Laura (Sarah), Jeffrey (Anna), Gregory (Ellen), Philip (Mary) and Katharine.  He loved being "Grandad Jack" to his grandchildren Hannah, Micah, Jacob, Emily, Jesper, Yannick and Pepin.

Jack was born in Stratford, Ontario and raised in Niagara Falls with his parents Mae and Walter Thomas, his brother Paul and his sister Jean.  He attended the University of Western Ontario and became a teacher.  Most of his teaching career was spent at Beamsville District Secondary School where he was Head of the Business Department for many years.  He served as an alderman for the Town of Lincoln and was Life Member of the Kinsmen through his years in the Beamsville Kinsmen Club.

Jack loved music, poetry and gardening.  He played trombone with the Town of Lincoln Band, the Port Colborne Band, the Niagara College Jazz Band and many other ensembles.  He listened to Dixieland and Big Band music.  He was a dedicated musician who, throughout his retirement, practised up to four hours a day and rehearsed weekly with The Seasoned Brass.

Jack spent many happy hours in his garden, especially growing hostas and trees from cuttings or seeds. Often, as he worked outside, he would recite poems, particularly those of Robert W. Service.  He is greatly missed.

Cremation has taken place.  In lieu of flowers, donations to The Heart and Stroke Foundation of Canada or the Greater Niagara General Hospital Foundation will be gratefully accepted.  Jack’s family would like to thank the team at the Greater Niagara General Hospital for their excellent and compassionate care.  A Celebration of Life will be held later this year.

Share Your Memory of
John
Upload Your Memory View All Memories
Be the first to upload a memory!
Admin Login | Website powered by FuneralTech & TA