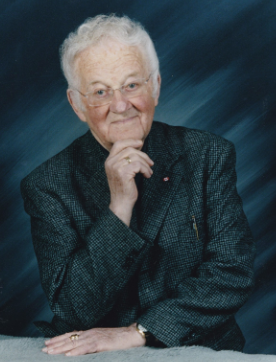 Abrahams, Jacob (Jack), of St.Catharines, Ontario, passed away peacefully at the age of 93 on March 10, 2020 at Henley House.  Jack was born on Sept. 18th,1926 in Glenwoodville, Alberta. His family moved to Leamington, Ontario and eventually settled in the Beamsville/Vineland area.  Jack was the fifth of seven children, two who died in Russia, brothers Henry and John and sisters Agatha and Anne who are all deceased.

In 1946 Jack was baptized and attended Vineland MB Church.   Jack married Adeline Ens in October 1948, they were blessed with five children. Jack had a successful 36 year career in auto sales as a manager for Charles Taylor & Company, Motorville and Neal Pontiac, then retired at age 56.  In his retirement, Jack loved to travel with his wife Addy, play golf, being a head usher at Grantham MB Church and having coffee with friends. Adeline passed away suddenly in May, 1997 after 48 years of marriage.

Shortly after, he met Helen Klassen at his church and they married in 1998 but sadly, she passed away in 2005.

Jack’s health started to fail in 2018 and he was moved to long-term care at Henley House. Through all his difficulties, he never lost his sense of humour and loved spending time with his family who visited him regularly.

In lieu of flowers, donations can be made in Jack’s name to the MCC Refugee Relief Fund. The family has decided not to have visitation and just have a private family burial at this time.

Share Your Memory of
Jack
Upload Your Memory View All Memories
Be the first to upload a memory!
Admin Login | Website powered by FuneralTech & TA