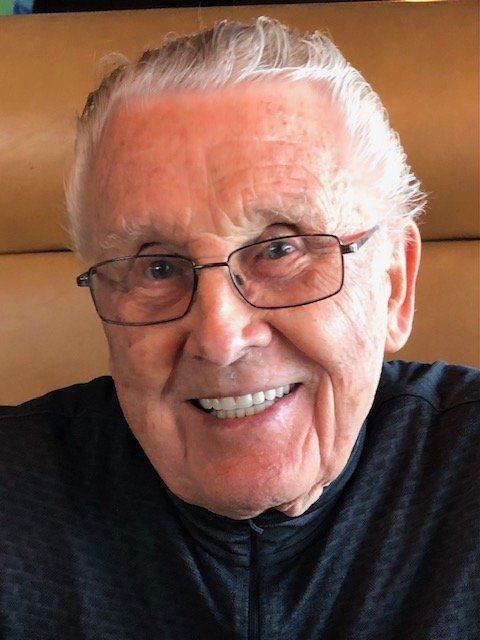 Marinus Brouwer was born in Zwolle, The Netherlands, on March 10, 1929, the eldest son of Mense and Fennigje [Ijzerman] Brouwer. As a young man he served in the Dutch Navy and later married Margaretha [Grace] Sluijter on June 30, 1951.  After moving to Canada in July, 1957 with two young boys, Ed and Rob, Marinus and Grace eventually settled in Grimsby. They were later blessed with two daughters, Rose and Theresa [Terie].  A licenced electrician, Marinus worked at Stelco and later opened his own business, Brouwer Electric on Main St. in Grimsby. After moving to St. Catharines, he became a top producing Sales Representative for Sovereign Life Insurance and received many awards. Marinus’s life was transformed in 1972 when he accepted Christ as his Lord and Saviour at Central Gospel Temple.  He soon became a faithful member of the Bus Ministry team.   He was active in the Full Gospel Businessman’s Fellowship. He was known for love of sailing—even naming his sailboat “Marinus-of the Sea”.

For many years he and Grace traveled in their RV, volunteering their time and talents in various locations across the U.S. with the Sowers Ministry. Marinus owned several motor homes over the years and on the back of each he had the following saying painted as an encouragement to anyone who happened to be following. “To enjoy the future, accept God’s forgiveness for the past.”

Marinus and Grace were married for 68 years. As mom’s health began to fail, Marinus faithfully cared for her, demonstrating in a most profound way, the meaning of true love.  After Grace passed away in July, 2019, Marinus moved to Martindale Place and later to The Orchards in Vineland.

Our dear father, Opa and Great-Opa slipped peacefully into eternity in the early hours of Monday, January 4 in his 92nd year.  Our loss is Heaven’s gain.

He will be missed by his brothers Marten [Frieda] and Bill [Edie].  Predeceased by his sister Jenny [Henk].

The family wishes to express our deepest gratitude to the caring staff at the Welland General Hospital for the compassionate care extended during dad’s stay.

A private Family Interment will take place Friday, January 8 at noon at Vineland Cemetery. A Celebration of Life will take place when Covid restrictions have been lifted.