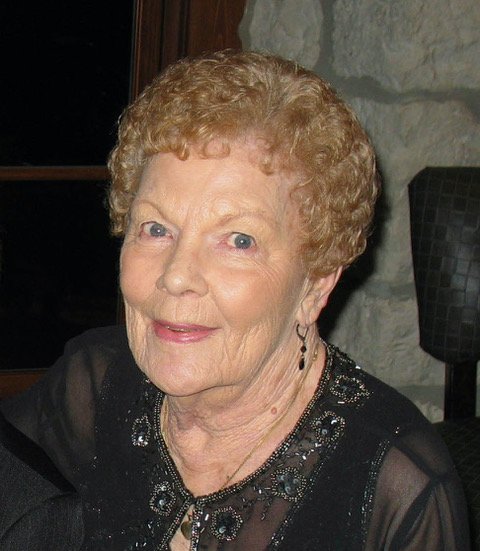 It is with heavy hearts that we announce the passing of Lorraine Yvonne Funk (nee Schoyen), our beloved Mom, Grandma, and Great-grandmother (Gigi).  Lorraine left our world peacefully at the United Mennonite Home in Vineland, Ontario on March 27 with her son, Doug, and daughter, Debbie, by her side.  Doug’s wife, Tracey, and Debbie’s husband, Art, also visited during her final week with us, along with the grandchildren and great-grandchildren virtually.

Lorraine was born on September 18, 1932 to Walter and Loretta Schoyen in Winnipeg, Manitoba.  She had one younger brother, Ronald.  She spent her growing up years in Brandon and Winnipeg.  She worked as a secretary after graduating from high school.  She met our father, Douglas Funk, on a blind date in the early 1950’s and they were married on April 10, 1954 in St. George’s Anglican Church in Winnipeg.  Debbie was born in September 1955, and 8 years later, were thrilled to welcome a 3 month old blue-eyed, blond, baby boy, Doug, to complete their family.

Lorraine and Doug spend most of their first 10 years of marriage in Winnipeg (with a brief time in Toronto), then lived in Lorne Park, Mississauga until 1973.  During these years, they loved to camp and had a travel trailer that took us many places and created many special memories.  With Doug’s work, they moved to Grand Island, New York for a few years, and then out west to BC where Mom’s parents and brother and sister-in-law, Ron and Irene, lived with their family.  Over the years, they enjoyed traveling to various places including Florida, Paris, England, Dominican Republic, and a favourite, Hawaii.   In 2007, they moved back to Ontario to be closer to our families.

Mom was mostly a stay-at-home mom, and she took much pride in keeping a lovely home and caring for her family.  She loved to cook and bake. She was even was featured in a newspaper in Mississauga in a two-part article series. Even after she moved to long term care, she would say “Oh no, I have nothing in my fridge to give you!” when we came to visit.  She always wanted to make sure we were well cared for.

Mom was the first to respond to help a family or friend in need.  In her more senior years, she volunteered at a thrift shop that raised funds for a local hospital foundation, as well as at a seniors’ home hosting birthday celebrations for residents.  She always took an interest in the lives of her caregivers.

Lorraine loved her children and grandchildren dearly, and would cherish time spent with them.  She would love to play with them and set up pretend shops or played with toys with them.  Even in her last few years, she enjoyed her visits with them, and was interested in hearing the latest news of their families.

Dad passed away in 2010, and Mom missed him dearly.  In her later years, as her memory failed, she would get quite annoyed with him, trying to figure out where he had gone and what was taking him so long to come back.

Mom lived in a retirement community in Cambridge near Doug and Tracey and family, until her health declined and she eventually moved to the United Mennonite Home in Vineland.  We were able to visit her there regulary up until the past year.  She had a reputation for frequently being found singing, whistling, or humming along to a tune, and her 50’s and 60’s music station was playing most of the time in her room.   This year, we were able to have regular contact with mom through phone and video chats thank to the support of staff.  She still knew us and loved to hear updates on family members.

We would like to express our sincere gratitude to all the staff at the United Mennonite Home for their exceptional care of Mom.  Also, for their support during this past week.  We were so grateful to have been able to have all of our immediate family be able to visit either in person or virtually.

Mom’s faith journey started in the Anglican Church, and they later attended a Lutheran church.  They were members of a United Church in Mississauga.  Lorraine enjoyed her visits with Chaplain, David Gifford, at the UMH over these past few years.

Lorraine leaves behind her children, Deb (Art) Reimer, Doug (Tracey)  Funk, her grandchildren, Lindsay (Craig) Hamm, Emily (Andre Kuthy) Reimer, Madison Funk and Mason Funk.  And her great grandchildren, Dylan, Adrie and Alexis Hamm, and Emma, Ashlyn and Brooklyn Kuthy.  She is survived by her sister-in-laws, Irene Schoyen, Virginia Funk, Cecilia (Funk) Bough (Ron), and Diane Funk.  She was predeceased by her only brother, Ronald Funk, and her parents, Walter and Loretta Schoyen, as well as her brother-in-laws George Funk, Roy Funk and Harold Funk.

A private gathering with immediate family only will be held to celebrate her life.

In lieu of flowers, donations in memory of Lorraine can be made to United Mennonite Home, Vineland, ON or the charity of your choice.