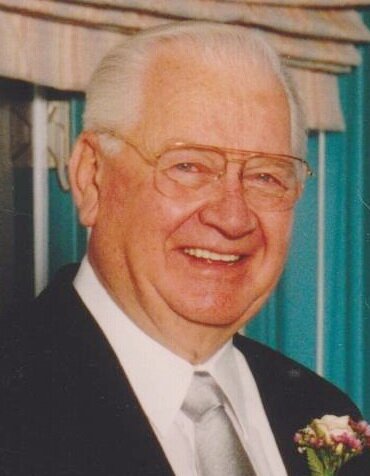 Frank F. Goertzen, 90, of St Catharines passed away peacefully on October 18.  He was born February 15, 1931 in Jansen, Saskatchewan, to Frank David & Nella (Thiessen) Goertzen.  In 1934 the Goertzen family moved to Wellesley, Ontario and later to Hespeler. In 1946. they moved to a farm in the Niagara area. Frank began his driving career delivering coal at age 17, and later drove truck for Direct Winters, ICL and then Yellow Freight, retiring in 1990.

Thank you to Dr. Matt Greenway, and staff at Tabor Manor Long Term Care for the care they provided to Frank over the last three years.

Private interment will be held at Victoria Lawn Cemetery on Friday, October 22, followed by a memorial service at Tallman Funeral Homes in Vineland, by invitation only. To view the Live Stream Memorial Service please go to the Tallman Funeral Homes Facebook Page on Friday, October 22 at 2:00pm. In lieu of flowers, donations can be made to Camp Crossroads or Radiant Care - Tabor Manor.

A Memorial Tree was planted for Frank
We are deeply sorry for your loss ~ the staff at Tallman Funeral Homes - Vineland
Join in honoring their life - plant a memorial tree
Share Your Memory of
Frank
Upload Your Memory View All Memories
Be the first to upload a memory!
Share A Memory
Plant a Tree
Admin Login | Website powered by FuneralTech & TA | Privacy Policy | Terms of Use