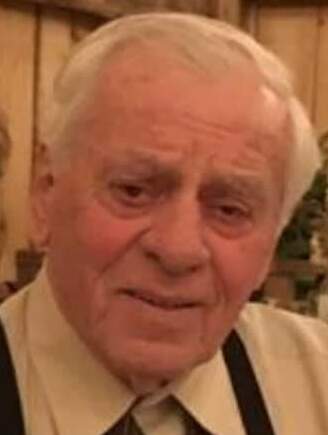 Please share a memory of Jim to include in a keepsake book for family and friends.
View Tribute Book

God in His infinite wisdom took unto Himself His child, Jim Heida into glory. He passed away at West Lincoln Memorial Hospital, surrounded by his loving family.

Jim leaves behind his beloved wife Christine. Predeceased by his first wife, Elsie (2001) and son Terry(1995). Survived by his children Renee and Ray Houweling, Marge and Randy Fields, Louis and Bernie Heida, James and Pam Heida, Carolee and Richard VanVeen. 27 Grandchildren and 23 GreatGrandchildren.

For many years Jim worked at Vineland Feeds, and as an area feed salesman to many Niagara Region farms. He was very active in his church community and dedicated his life to the service of his Lord and Saviour. Jim was a member of several area choirs, and a soloist at many weddings. His most joyful times were those spent with his family.

Unfortunately, due to the impact of Covid, there will be no visitation – however the family would love to receive any notes of sympathy, encouragement or shared experiences.  These can be left at this website.

Private family interment will take place at the Vineland Cemetery.

A private service will be held at Immanuel United Reformed Church on Wednesday January 19 at 12:30pm.   Again due to Covid restrictions, service will be limited to Jim’s wife and children only. Friends and faith community are encouraged to view the livestream of the service at www.immanuelurc.com/ , click on the Live Stream prompt on the front page.

The family wanted to share the following link of Jim singing - https://youtu.be/JPhCT6W888Y

UPDATE: The funeral service has been rescheduled for Wednesday, January 19th at 12:30pm with the livestream still available.

A Memorial Tree was planted for Jim
We are deeply sorry for your loss ~ the staff at Tallman Funeral Homes - Vineland
Join in honoring their life - plant a memorial tree
Share Your Memory of
Jim
Upload Your Memory View All Memories
Be the first to upload a memory!
Share A Memory
Plant a Tree
Admin Login | Website powered by FuneralTech & TA | Privacy Policy | Terms of Use