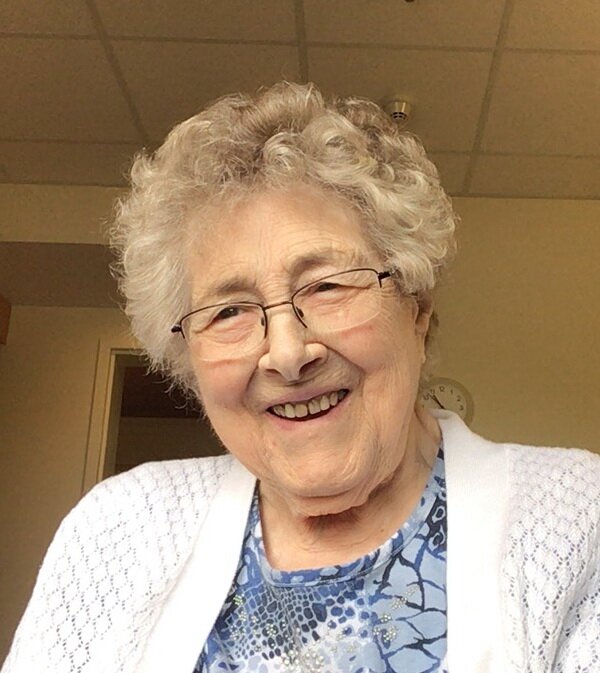 All Provincial COVID Protocols will be in place including the wearing of masks at all times.

The family will receive friends at the Vineland Chapel of Tallman Fuernal Homes, 3277 King St., Vineland on Monday February 7, 2002 from 10 - 11am. Pre-registration is required for the visitation. Please CLICK HERE to register. A private funeral service will be held with interment to follow at Niagara Lakeshore Cemetery.

For those wishing to view the livestream opn Monday February 7 at 11:00am please click this link - Marina Van Damme Livestream

Marina Lobbezoo was born on December 9, 1926 to Willem and Christina Lobbezoo at Krabbendijke, Zeeland, Nederland. She was the oldest of 8 children.

Marina, known as Marie to most people, met Laurens Jan van Damme in 1946, immediately after the Second World War. Both were residing in Zeeland, the Netherlands at that that time.

Marie grew up in the Wilhelmina Polder, located in Zuid Beveland in Zeeland. She attended public school for six years, from age six until age twelve. Upon graduating from public school at age twelve, she was offered a position as maid at the home of the farmer where her father was employed. She worked there until she married Laurens, who was known by most people as Lau. They were married on February 16, 1951.

They lived in ‘sHeer Hendrickskinderen, Zeeland in the Netherlands. For the first year they lived with my Dad’s parents, until they bought a small home in the same village.

Here they had a family, myself, Wilma, and three years later Bill.

In 1963, the family immigrated to Canada, starting out in Stevensville, Ontario.

Mom enjoyed socializing, especially with her closest friends all belonging to the Zeeuwse club. These were all people originating in the same province of Zeeland in the Netherlands. Mom was the last remaining member of this club.

In 1979 the first grandchild arrived, to the great pleasure of Oma and Opa. Mom simply loved being Oma to all five grandchildren, Mike, Melissa, Sharon, David and Christina. She thoroughly enjoyed hosting many sleepovers over the years for the grandchildren.

In 1982, they moved from the farm to a home in St Catherines, where they lived very comfortably for 17 years together.

Mom was very creative, knitting and sewing many items of clothing. The boys thought she made the very best socks ever, colour-coded and all. The girls always had a new outfit on that Oma had sewn.

When the grandchildren were in school, and their Mom went back to work, Oma came over with a pot of soup for the children to eat at lunch. Soon, Oma was serving soup to not only her grandchildren, but their friends as well.

Mom enjoyed travelling, and she and Dad did many driving trips together throughout Canada and the United States.

In September, 2019, Mom moved into Albright Manor due to a decline in her health status. She passed away comfortably and quietly on Monday morning, January 31, 2022. We are grateful for the excellent care she received at the home during her last years with us.

I know I speak for all of our family when I say Mom will be greatly missed, and we have profited much from having her in our lives. We will remember her fondly, knowing she loved us all deeply.

A Memorial Tree was planted for Marina
We are deeply sorry for your loss ~ the staff at Tallman Funeral Homes - Vineland
Join in honoring their life - plant a memorial tree
Share Your Memory of
Marina
Upload Your Memory View All Memories
Be the first to upload a memory!
Share A Memory
Plant a Tree
Admin Login | Website powered by FuneralTech & TA | Privacy Policy | Terms of Use