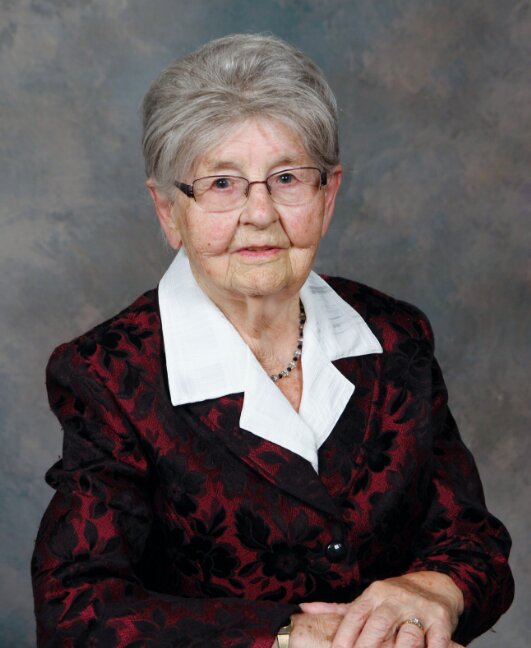 Please share a memory of Irene to include in a keepsake book for family and friends.
View Tribute Book

Friesen, Iresen - Early Saturday morning, February 5, Irene Friesen (our mother and Oma) passed away at the St. Catharines General Hospital.  She was 95 years old.  She was predeceased by her beloved daughter Helen, husband Abram, great granddaughter Anna, and son-in-law Erich.  She lived a remarkably long and happy life given the tragic circumstances of her childhood.  Her parents were Johann and Helene Funk.  She was born on April 6, 1926 in Nicolaipol, Ukraine, when Ukraine was under the grim rule of the Soviet Union.  She had two brothers named Hans and Teo and two sisters named Helene and Tina.

Like many Mennonite families, Irene’s family lost everything during the Stalin dictatorship.  Their farm was “collectivized” and their home, old family Bibles, and library were ransacked by Soviet thugs, and their father was sent into Siberian exile from which he returned once, only to be exiled again and never seen again.  The surviving family members were labeled “kulaks,” cut off their starvation rations, and forced to flee to Zaporijia where they were taken in by relatives and where her education continued.  She was a precocious student, excelling in languages and math.

In the chaotic aftermath of the Second World War, she was among the first refugees to sneak across the newly established Iron Curtain and into the free West.  She was only 17 at the time and managed to find a Displaced Persons camp that would take her in.  In 1948 she crossed the Atlantic Ocean by ship and landed in Quebec City.  For the next years she worked at every available job to pay back her transportation debt.  She worked in canning factories, and in a little cafe across from St. Catharines Collegiate, as a nanny, and at General Motors.  She also met and married Abram Friesen who had also come to Canada as a refugee.  Both became proud Canadian citizens, and together raised three daughters: Irene (Erich), Helen (John), and Marilyn (Kevin).

We had many happy times together as a family at home and camping. We spent hours hiking, picking blueberries, and playing at the beach. Mom loved the water but she wasn't much of a swimmer. She never wanted to get her hair wet but she was a great encourager.  This became very evident when we grew older and invited friends to join us camping on the weekends. She joined in the games we played and encouraged us to jump in the lake and go swimming or skiing regardless of the water temperature. She would make blueberry pancakes, pies, and perishkies, making sure everyone had enough delicious food to eat. So many good memories!   Mom's greatest joy was having her grandchildren Julie, Daniel, Philip, Allen, Kristina, and Darryl and then her grandchildren Miriam, Nehemiah, Anna, Hadassa, Simeon, Alexander, and Joel.  Opa and Oma's home became a place where the grandchildren always knew there would be good food, lots of fun, and unconditional love.

Mom was a woman of strong Christian faith and joy.   She was a wonderful example to her family.  She usually looked for the positive side to any situation. Her positive spirit helped her overcome many hardships in her life.

Since Dad passed away on June 21, 2008, Mom has lived at Pleasant Manor in Virgil and then at Tabor Manor in St. Catharines.  She had many dear friends, especially the women with whom she quilted at church.  Over the years they created many exquisite quilts, and proceeds from those quilts supported Mennonite Central Committee and Albert Schweitzer Leprosy Hospital.  We believe that now she is reunited with beloved members of her family who crossed over into heaven before her.

Her funeral service will be on Thursday, February 10 at 10:30am at St. Catharines United Mennonite Church at 335 Linwell Road in St. Catharines.  An hour of visitation at the church will precede the service.  All COVID Provincial Protocols will be in place.  Burial at Niagara Lakeshore Cemetery will immediately follow.  If you wish to make a donation in her memory, the family would especially appreciate donations to Mennonite Central Committee

A Memorial Tree was planted for Irene
We are deeply sorry for your loss ~ the staff at Tallman Funeral Homes - Vineland
Join in honoring their life - plant a memorial tree
Share Your Memory of
Irene
Upload Your Memory View All Memories
Be the first to upload a memory!
Share A Memory
Plant a Tree
Admin Login | Website powered by FuneralTech & TA | Privacy Policy | Terms of Use