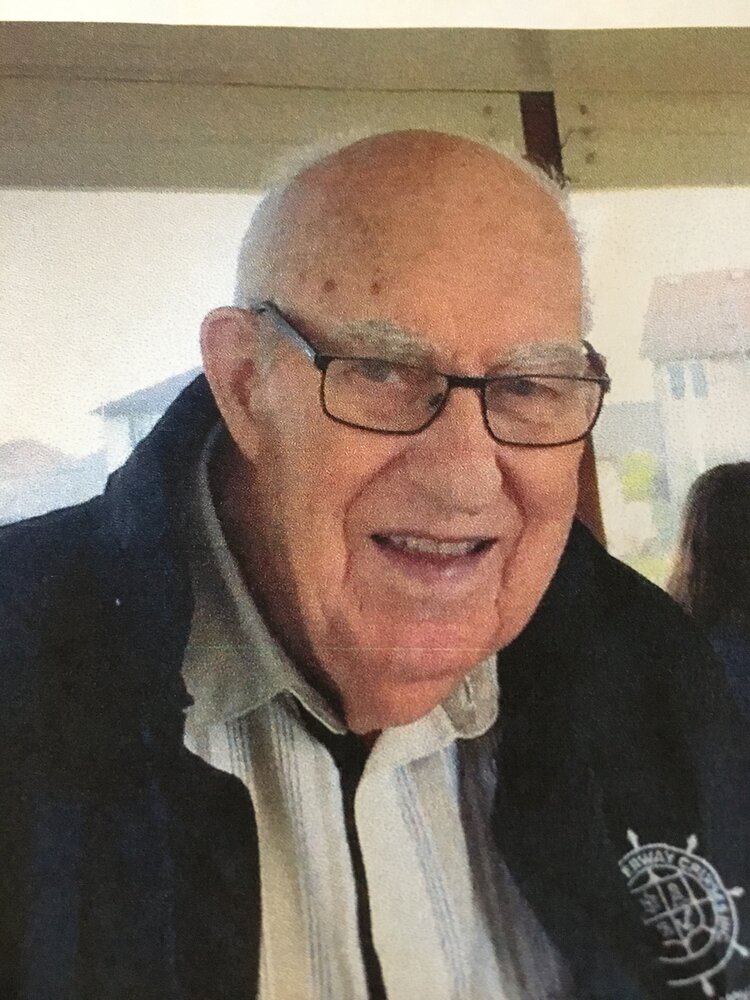 Please share a memory of George to include in a keepsake book for family and friends.
View Tribute Book

George Wichert passed away Sunday, February 13, at Pleasant Manor in Virgil. He was 94 years old.

George was born in April 1927 in Kitchener, Ontario, to Henry and Elisabeth (Funk) Wichert, who had immigrated to Canada from Russia the previous year with their 3 eldest children. George was the first of five children born in Canada. Except for Margaret, who died at age 2, the rest all remained in and around Virgil, and in time the 7 siblings, 6 spouses, and 23 children formed a large and close-knit family clan.

In 1935 George’s parents bought land in Niagara-on-the-Lake, building a house and establishing a farm on Niven Rd. This is where he grew up and developed his love of farming. George’s schooling was interrupted by WWII. With his 2 older brothers away doing alternative service, he had to work to support the family. After the war ended, he went back to finish high school at the newly formed Eden Christian College (now Eden High School), which at the time was located in Niagara-on-the-Lake. He was the first in his family both to finish high school and to go on to university. He attended Waterloo College of Arts (later renamed Waterloo Lutheran University, and eventually Wilfred Laurier University), followed by a year of teacher’s college in Toronto, and then started his career as a high school teacher.

In 1954 George married Bertha Dick, a young woman he had met in the Virgil Church youth group, who had recently graduated from nursing school. After a year of teaching in Ingersoll, Ontario, he was invited to return to Virgil and teach at Eden, thus beginning his 32-year career at the school, including 12 years as principal.

George and Bertha moved back to Virgil, bought a property on Henry St. (at the time only a dirt track, with electricity, but no running water), and George began building a house, while starting a new teaching position at Eden. In December their first son, David, was born. While Bertha was in the hospital giving birth, George spent his Christmas holiday installing a furnace so there would be heat when Bertha and Dave came home. Gradually, in the coming years, the house was finished, and the family welcomed 4 more children: Nancy, Timothy, Geoffrey and Suzanne.

In 1970 the family moved across Virgil, to a new house on Line 1, where they began farming 5 acres of land that Bertha’s father had passed on to his children. The cherry and peach orchards here became another defining feature of the family, blending the rhythm of pruning, tending and harvesting with the cycles of the school year. A few weeks each summer spent at Elim Lodge, in the Kawartha Lakes, were a welcome reprieve. In 1978, eldest son Dave was tragically killed in a motorcycle accident while travelling with friends (including his brother, Tim) in Nova Scotia.

George had been ordained as a minister in 1964, and after his retirement from teaching in 1987 he and Bertha spent several years doing pastoral ministry in Mennonite churches, first in Germany and then back in Virgil. Bertha died of cancer in 1997, after nearly 43 years of marriage, and the following year George married Linda Willms, with whom he would spend the remaining 24 years of his life. Beginning in 2000, George and Linda also spent 9 years doing ministry with seniors at Cornerstone Community Church.

George has always loved to travel. In addition to regular family camping trips, he and Bertha did major excursions to Europe, India, and Africa. Together with Linda he travelled to Europe, Israel, Alaska, UK, the Mediterranean, and the Caribbean. In between these major excursions, Ontario canal cruises and several US locations (Pennsylvania, Myrtle Beach, Florida) were favourite destinations, as well as trips to Winnipeg, MB and Kelowna, BC, to visit children and grandchildren there. It was fitting, then, that we celebrated his 90th birthday with a Caribbean cruise including all 4 children and their partners.

All Provincial COVID Protocols will be in place including the wearing of masks at all times.

The funeral will take place Tuesday, February 22, 11:00am at Cornerstone Community Church, 434 Hunter Rd., Niagara-on-the-Lake, with visitation an hour before the service starting at 10:00am. The service will be livestreamed at https://cornerstonenotl.online.church/, and available subsequently on the church’s YouTube channel.

Burial at Niagara Lakeshore Cemetery will happen immediately following the service. There will also be visitation at the church on Monday, February 21, from 5:00-7:00pm

Memorial donations may be made to the Eden High School Spiritual Life Centre (www.slceden.com/donation) or Camp Crossroads (www.campcrossroads.com/give/)

If you have stories, memories or pictures of George you’d like to share, the family would be very grateful if you could place them on the tribute wall at Tallman Funeral Homes, or contact a member of the family directly.