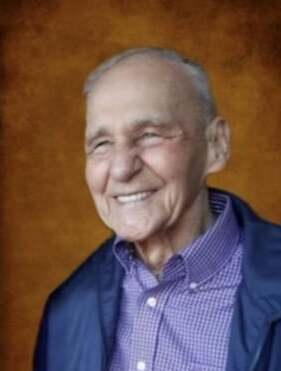 Please share a memory of Cornelius to include in a keepsake book for family and friends.
View Tribute Book

Cornelius (Cornie) Neufeld passed away peacefully with the love of his life Helen of 72 years and all five of his children around his bedside.

Cornie was born in Aberdeen, Saskatchewan. His parents, Henry and Anna (nee Sawatsky) moved to Ontario when Cornie was a young boy. Coincidently, Helen moved from Glenbush Saskatchewan to Ontario a few years later for work. She lived with her aunt and uncle who just happened to live across the road from the Neufelds. As they say, the rest is history.

Cornie and Helen married in 1949 and had 5 children, Bev, Gary, Brian, Cheri and Rodney. Cornie worked at GM, starting at age 15, for 45 years. During this time they also bought a 10 acre farm. They were seldom idle. After retirement they moved “up north” where they enjoyed many years, then returned to Virgil. In the last four years they enjoyed living at Pleasant Manor.

Anyone who knew Cornie and Helen were quickly struck by the depth of their love for each other. Anyone who knew Cornie was awed by his gentle soul, his commitment to family, his unending integrity, his strong work ethic, his love of God, his amazing memory, his ability to actively listen and his love of watching his family enjoy life. A better role model for a life well lived would be hard to find.

Cornie began to fail a few years ago and was ready to “go home.” He died as he lived; with grace and dignity. He leaves behind the woman he cherished, Helen Neufeld (nee Werstroh), Bev (Andrea, Greg, Scott), Gary (Spiery, Kai), Brian (Sayre, Haley), Cheri (Jason, Julie), Rod (Raichel, Colten), 12 grandchildren and 18 great grandchildren. He will be missed, remembered and admired.

A celebration of his life will be held at Grace Gospel Church in Niagara Falls on April 28th with visitation beginning at 10:00 am and service to follow at 11:00. There will be a lunch following the service at the church.

For those wishing to view the livestream please follow this link - Livestream - Cornie Neufeld.

A Memorial Tree was planted for Cornelius
We are deeply sorry for your loss ~ the staff at Tallman Funeral Homes - Vineland
Join in honoring their life - plant a memorial tree
Share Your Memory of
Cornelius
Upload Your Memory View All Memories
Be the first to upload a memory!
Share A Memory
Plant a Tree
Admin Login | Website powered by FuneralTech & TA | Privacy Policy | Terms of Use