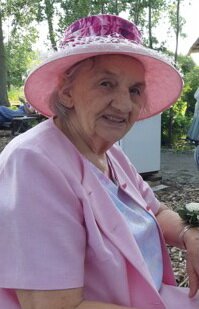 Please share a memory of Martha to include in a keepsake book for family and friends.
View Tribute Book

Martha was born in a log cabin in Reesor, Ontario. In 1940 the family moved to NOTL. She graduated from St. Catharines Collegiate in 1950 and started her secretarial career at the Radio Station CKTB. In 1964 while a secretary at Anthes Imperial, she was chosen Secretary of the Year by the St. Catharines Chapter of National Secretaries Association. During her career, she taught at Niagara College and then worked for the Federal Government until her retirement in 1993. After retirement she volunteered for a number of organizations, and received special recognition from the City of St. Catharines and the Province of Ontario for her services at Heidehof and at the United Mennonite Home in Vineland, where she often entertained the seniors, as soloist or as duet with her husband Arno.

Martha attended Brock University as a “mature student” and graduated in 1979 with a BA degree with distinction, majoring in business administration and politics. Music was her passion and she took part in many musical workshops throughout her life. She started playing her acoustic guitar while a teenager, sang in church choirs from the age of 14, and sang in community choirs including the Heidelberg-Rheingold Singers and the Niagara Chamber Choir. She studied “voice” under the direction of late Kathryn Newmann and often sang at funerals, weddings, and other special occasions.

Martha visited all of the Canadian Provinces from Vancouver Island to P.E.I., toured parts of the United States, flew to Cuba and to the Dominican Republic several times and in 1992 she visited relatives in Germany. Although she usually travelled by herself, she did accompany her Uncle Henry to visit his friends in Mexico,  and with him she visited Disney in Florida.

In 1998 Martha married Arno Bartel and there were some more trips but most of their time was spent looking after Arno's property in NOTL. They both enjoyed ballroom dancing and square dancing. After Arno died in 2018, she moved to Lindenhaus, (Heidehof) in St. Catharines. Martha was a member of and volunteer for Heidehof and Club Heidelberg for many years.

Cremation has taken place. In Lieu of flowers, memorial donations may be made to Hospice Niagara.

Visitation will take place on Wednesday May 11 from 6-8pm at the Vineland Chapel of Tallman Funeral Homes, (3277 King street, Vineland). Funeral will take place, May 12 at 11 am at St Catharines United Mennonite Church, 335 Linwell Road in St. Catharines.

A Memorial Tree was planted for Martha
We are deeply sorry for your loss ~ the staff at Tallman Funeral Homes - Vineland
Join in honoring their life - plant a memorial tree
Share Your Memory of
Martha
Upload Your Memory View All Memories
Be the first to upload a memory!
Share A Memory
Plant a Tree
Admin Login | Website powered by FuneralTech & TA | Privacy Policy | Terms of Use