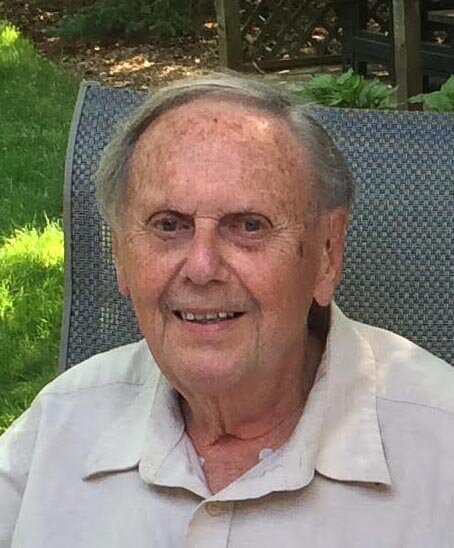 HUNTER, Donald Keith – Peacefully after a brief illness at Greater Niagara Hospital on Saturday, May 28, 2022 in his 94th year.  Much loved partner of Madeleine Hoxie, dear father of Brian (Deborah) of Kitchener, Janet of Meteghan, Nova Scotia, Susan (Leonard) Guise-Bagley of Barrie, and Tim (Ginny) of Vineland. Don is also survived by four grandchildren, Meredith and Matthew of Kitchener and Katie of Vineland and Scott of CFB Wainwright, Alberta, and two great-grandchildren, Aubree and Ella of Kitchener.   He was pre-deceased by his wife of 56 years, Joyce, and his parents, Douglas and Mary Hunter.

A native and life-long resident of St. Catharines, Don had a long career in the retail profession. He began working in the family businesses at Hunter & Son selling appliances and later managing Crest Hardware.  Thereafter, he acquired the franchise for the Dairy Queen on Geneva Street and another on Lundy’s Lane in Niagara Falls. After running those for many years he sold them, retired briefly, and then purchased the Second Cup store at the Pen Centre.  Don’s other career was as a lay preacher.  He was able to be of service to many churches as a supply minister all around the Niagara Peninsula.  For four summers, he took the family to Virginia and Pennsylvania where, in return for accommodation in the church manse, he would conduct Sunday services.  He was a long-time member of St. Paul Street (now Silver Spires United) and Mountainview United Churches.  He was also a past-President of the St. Catharines Symphony Association.

During his retirement years, Don loved to travel, particularly by boat.  His favourite trips were down the Nile in Egypt, the canals in Holland, the Danube and Rhine rivers in Europe, and over a dozen trips on the St. Lawrence Seaway.

Our family would like to thank the staff of Heatherwood Retirement Residence, Jacqui Sedore, and the Hoxie family for caring for our father and bringing him much joy during his final years.

In lieu of flowers, donations to the Joyce Hunter Bursary in Music at Brock University would be appreciated by the family.  Cremation has taken place. A private family event will take place at a later date.