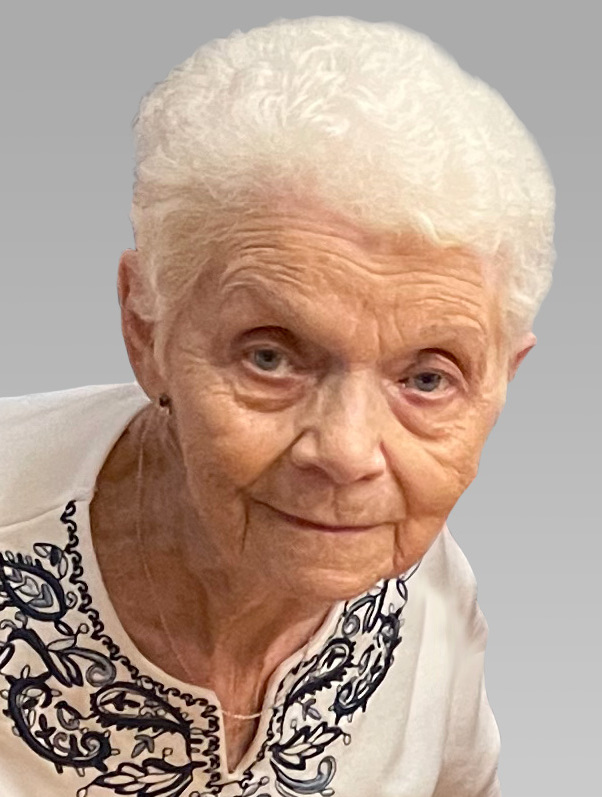 It is with great sadness that we announce the passing of Joan Friesen at the age of 86 at the Welland Hospital.

Joan was deeply loved and will sorely missed by her devoted husband of 68 years, Ben Friesen.

Also left behind were her sister-in-laws Rita Osman, Helen Giesbrecht and Carol Friesen.  She was Aunt Joan to many nieces and nephews and she was a very special and much loved Aunt Joan to niece Marilyn Holmes.

For most of her life she was a hard working farmer’s wife but when there was time, she loved going to the trailer and playing music around the campfire.  Joan was known to play a ‘mean omnichord’ and sing as she accompanied Ben’s guitar playing.

You were very fortunate to be Joan’s partner for a game of Euchre or Hand and Foot and the grandchildren loved playing Michigan Rummy and Uno with her.

Joan was an avid baker and considered “the best cook and baker in the world” by her family.  She knew all her family’s favourites and made you feel so special on your birthday when the meal and dessert she prepared was made with just you in mind.  Christmas was a huge spread made with love by Joan.  Everyone’s favourite Christmas goodie was there, and we all got to take home any leftover favourites.  Every once in a while (but not often enough) she would even make her own favourite, coconut cream pie.

After retiring from farm life Joan and Ben moved to their new home in Beamsville.  Eventually the time came for them to downsize and they moved into the new retirement home in town.  During her time there Joan enjoyed playing Euchre with the group and watching Blue Jays games, Jeopardy, Match Game and Blue Bloods on TV.  She enjoyed herself most when Brad Boland came to entertain and sang her often requested “Blue Eyes Crying in the Rain”.

Joan has been cremated and will be interred at Mount Osborne Cemetery at a private family gathering.

A Memorial Tree was planted for Joan
We are deeply sorry for your loss ~ the staff at Tallman Funeral Homes - Vineland
Join in honoring their life - plant a memorial tree
Share Your Memory of
Joan
Upload Your Memory View All Memories
Be the first to upload a memory!
Share A Memory
Plant a Tree
Admin Login | Website powered by FuneralTech & TA | Privacy Policy | Terms of Use