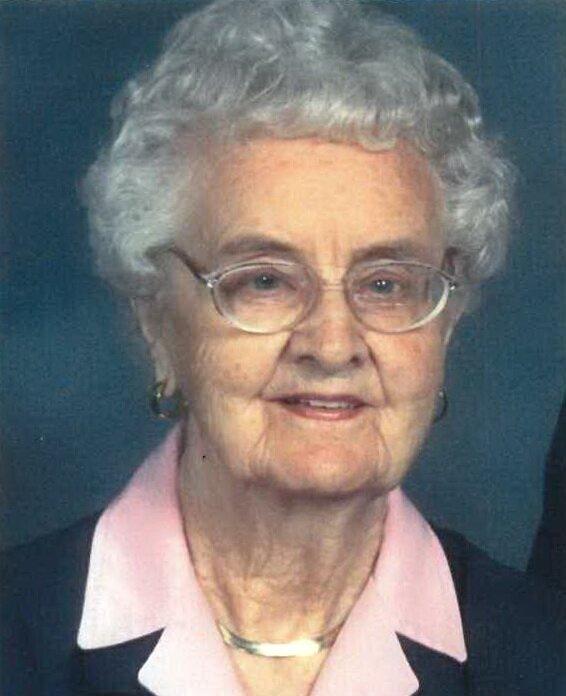 Nita Enns was born on March 28, 1922 in Taurida, Friedensdorf in the Crimea, to Klaas and Katharina Braun Enns. Her early childhood was filled with the painful consequences of the Russian Revolution. Nita moved with the family to Canada in 1925.

An Aunt decided young Nita was too active for her liking.  She taught her to knit.  Thus began a lifetime of knitting, crocheting and other handwork projects. In the 1930s the family, now with 8 children, moved to the Fraser Valley in BC and became dairy farmers. Nita was allowed to continue high school if she milked the cows mornings and evenings. How she hated those cows!

Nita accepted Christ as her Saviour early in life and was baptized in 1939 in the South Abbotsford Mennonite Brethren Church. Nita entered nurse’s training at Vancouver General Hospital, graduating in 1946. Shortly after, the Enns family moved to Ontario. Nita took a position with the Victoria Order of Nurses (VON). In St. Catharines, Nita met Jim Siebert and they were married on October 22nd, 1949.

In 1951, Jean arrived. Born with Down Syndrome. Thus began a 60-year commitment to care for and support Jean. Four boys followed: Allan, Paul, Lorne and John. Nita handled much of the day-to-day childcare in the home as Jim completed his education and worked long days. Nita was practical—all four boys would be dressed in red shirts so that she could find them in a crowd.

The young Siebert family moved to Hamilton in 1959 when Jim began to work at Hamilton Teachers College. Nita briefly ran a private nursing home for seniors, moving the family to Vineland in 1968. She subsequently returned to nursing with the VON.

After retirement in 1979, Nita and Jim enjoyed traveling to many countries of the world, and visiting with their children and grandchildren. After Jim died in 2006, Nita moved to an apartment at Tabor Manor, where, ever the nurse, she volunteered with feeding and foot care of residents at Tabor. In her later years, Nita was assisted by her niece, Nancy Thiessen. Nita’s family is very grateful to Nancy for her help and friendship over the years.

On March 28, 2022, Nita celebrated her 100th birthday. She then moved to a retirement home in Ottawa where she could receive greater care and be close to the daily help provided by Paul and Moira. She died peacefully in her sleep on October 23, 2022.

Nita was predeceased by Jim in 2006, Jean in 2010 and Allan in 2017.  Nita is survived by her remaining children: Paul and Moira, Lorne and Colette, John and Carolyn, and Judy.  She is also survived by her much beloved grandchildren and great grandchildren: Clarisse and Leif and daughters Harriet and Maude; Dylan; David and Dana; Cora and Will; Ally and Tyler; Calvin and Anne-Marie; and Carter; and by one sister-in-law, Hilda Schellenberg, and many nieces and nephews

“Jim and I are very proud of all of you!!  You have brought us much joy and love. Keep trusting God. I pray a special blessing on each of you. May God bless you and keep you always.”

She signed the letter with:

I love all my names.”

To view the Live Stream of the funeral, please follow this link at the time of the service - PLEASE CLICK HERE

If desired, memorial donations can be made to Mennonite Central Committee Ontario, or to Community Living Grimsby, Lincoln & West Lincoln.

A Memorial Tree was planted for Nita
We are deeply sorry for your loss ~ the staff at Tallman Funeral Homes - Vineland
Join in honoring their life - plant a memorial tree
Share Your Memory of
Nita
Upload Your Memory View All Memories
Be the first to upload a memory!
Share A Memory
Plant a Tree
Admin Login | Website powered by FuneralTech & TA | Privacy Policy | Terms of Use