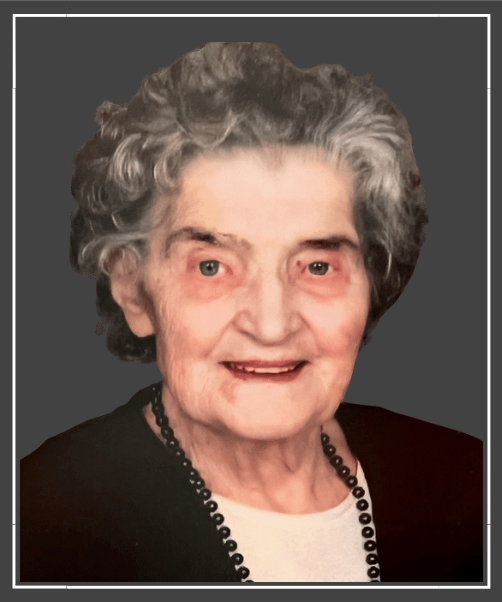 Erna Welke was born on March 13, 1925, the 8th of 11 children, born to Lydia Stiller and Ludwig Welke. This was in a very poor section of Iwanovka, Ukraine. Mom's father and two brothers were suddenly taken at various times by the Communist army for questioning, but were never seen again. Through the difficult times of trying to sustain the family, mom was able to build a strong and lasting faith in Jesus, her Lord and Saviour. Along with her mom and several of her sisters, Erna was convicted by the Holy Spirit to become baptized in the local river at the age of 19. Her early spiritual decisions were to lead her, strengthen her, and carry her through many difficulties in life, and she never wavered in her faith.

In 1942, Erna's mom and five children were compelled to leave their home, because of dire Communist threat, and took only what they could carry to outrun the war. They were running for their lives, so as not to be sent to Siberia. This was a very difficult journey, heading back west first to Poland and then Germany, to keep what was left of their family alive. We heard many stories of survival, of hiding in ditches, eating only roots, and frightful bartering with soldiers who did not speak their language. Finally they reached a safe refugee house in Germany, and were able to eke out a living, with all of them working various jobs.

They moved a number of times. In Gronau, in 1947, Erna met her future husband Abram Duerksen at a youth event, and he said he knew right away that he would marry her. Since the war was now upon them, many people were desperate to leave Germany. The family heard about MCC (Mennonite Central Committee) getting people out by ship from the German port of Hamburg. Land had been bought in Paraguay, and Mennonite refugees would be taken. They needed to wait, and work, til the spring of 1948, but then Erna's family, and also Abram's family, boarded the Charlton Monarch and made a hazardous crossing to South America. The ship had many difficulties, but particularly when it was stranded offshore of Brazil for a month before the passengers could safely disembark. Erna became engaged to Abram on the ship, and in August of that year they were married in a double ceremony with her sister Alma and Jacob Lepp.

Each family was given, by MCC, some basic items for survival, but living in the hot, dry wasteland of Paraguay was very challenging. Erna and Abram were given 5 acres to farm in the small community of Steinfeld, and dad built a blacksmith shop and ran it for all the years they lived there. Their first daughter, Elsa, was born in 1949. Albert and Heidi were born the following years, but died in infancy. Lydia was born in 1953, Erna in 1955. Because living in Paraguay was so hard, they soon looked to move. They heard Canada was taking immigrants. Abram's sister found a sponsor, so they packed up their small family and flew to the cold north, in May of 1957.

They settled in St. Catharines, where Erna worked at Boese Foods Canning factory, and then later as a seamstress at Warren Knits. Kornelius was born in 1957, Harold in 1959, and Marianne in 1964. Mom and dad both worked very hard to build a future for their children. A brand new house was built on Northdale Drive, by the labours of their hands, taking apart older buildings and re-building.

Erna always modelled and directed her children to give their hearts to the Lord, and they all did. Together with dad, Erna contributed much to the life of her local faith community, Scott St. Mennonite Brethren church. Even in her older years, Erna was always overjoyed when she could come to church and worship her Lord and Saviour. In the past years, we saw that mom's health was declining. She struggled to keep her strength, her mobility, and her memory, but she never lost her love and passion for her God, and for her family. Many remember her as the sweet old lady who always blows kisses!

With only one night in hospital, the angels came in the morning of October 28, and gently lifted mom into glory! We are truly rejoicing with her! We are so grateful for all the loving caregivers who attended to mom, both at Heidehof, and at Tabor Manor.  We feel truly blessed to have had such wonderful care for her.

Funeral arrangements have been made through Tallman Funeral Homes. The celebration of Erna's life is on Thursday, November 3 at 11:00 a.m. at Scott St. MB Church (339 Scott Street, St. Catharines), with visitation before from 9:30 a.m.

Any donations, in mom's honour, can be made to the Mennonite Central Committee (MCC), an organization which had helped mom's family in the past, and continues to help many less fortunate around the world.

The funeral service is to be livestreamed, to view the livestream at the time of the service, click here - Erna Duerksen Livestream

A Memorial Tree was planted for Erna
We are deeply sorry for your loss ~ the staff at Tallman Funeral Homes - Vineland
Join in honoring their life - plant a memorial tree
Share Your Memory of
Erna
Upload Your Memory View All Memories
Be the first to upload a memory!
Share A Memory
Plant a Tree
Admin Login | Website powered by FuneralTech & TA | Privacy Policy | Terms of Use