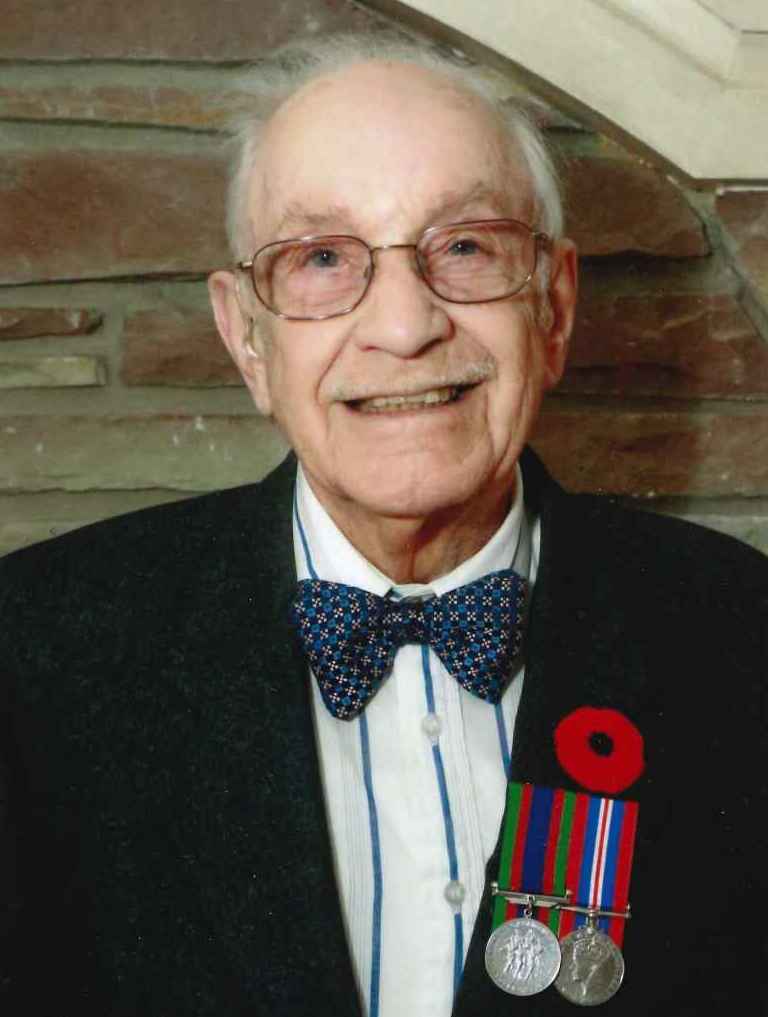 It is with great sadness that we share the news that our dear Jim passed away peacefully on December 1st, 2022, at the West Lincoln Hospital in Grimsby, seven months shy of his 100th birthday. He was surrounded by his close family. He is predeceased by his beloved wife Edra (2017).

Jim was born in Winnipeg to parents James Richard Thompson and Margaret Cross (Benner) both having passed in 1967. Jim grew up in Winnipeg, Medicine Hat, Kenora, Port Colborne, Niagara Falls and St. Catharine’s.  He spent many summers on his grandfather’s farm on Beechwood Road in Niagara Falls and at a ranch in Montana.

After completion of High School at St. Catharine’s Collegiate (April 1943) he joined the RCAF in Pilot Training. When the Pilot course terminated, he re-mustered as an Air Gunner graduating in 1944. After discharge from the RCAF, Jim attended Victoria College at The University of Toronto where he met his wife Edra Elizabeth Wooley. They married on February 9, 1951.

Jim worked at Canadian Comstock Co. on the electrical frequency exchange from 25 to 60 cycle. He then moved to Thompson Products where he oversaw USAF machinery brought in for jet engine blade production. He also held positions of Manager of Plant & Property, Accounting, Credit Manager and Manager of Benefit Administration. He resigned in 1973 to pursue a career in Real Estate Sales working for Guaranty Trust, Davco Realty and Brock Real Estate as a Broker until 1992.

Jim and Edra were devoted members of Queen St. Baptist Church and lived in St. Catharine’s until 1964 when they bought 17 acres on the top of the Niagara Escarpment west of Vineland, Ontario. Jim was an Amateur Radio Operator with the call sign VE3BCA (since 1947) and loved their home “Ben Rockwood” given its high spot for his antennas. As a young man Jim was in bed for 12 months due to illness – this bed rest founded his great love for amateur radio.

He was a founding member of the Niagara Peninsula Amateur Radio club in 1948 and compiled the club history from 1948 to 2008.

Jim was a Grand Lodge Officer with St. George Masonic Lodge #15 – having been a member for over 60 years, serving as a Master in 1964/5. Jim was a life member of the American Radio Relay League, Radio Amateurs of Canada, a past President (1957) of the Niagara Peninsula Radio Club (NPARC), and the Quarter Century Wireless Association. The NPARC created an award in Jim’s name.

Jim was a bowtie wearing, pipe smoking legend in our family for many reasons. His fully stacked pocket protector said more about his love of statistics and his need to always be prepared than anything else. His keen interest and skill in engineering and re-engineering from his workshop amazed us all. Jim was a superior natural athlete and an avid tennis player, playing into his late 80’s. His quick wit, humour, charm, and knack for storytelling always made us laugh right until the very end. His love of both family and dogs was quiet but deep. He sought to remain independent until his last few weeks with us.

Nature and sanctuary were Jim and Edra’s dream; evident as they devoted their entire life to designing, building, and living within Ben Rockwood, on the Niagara escarpment. A gentleman always, we will sorely miss his sparkle and quiet ways.

Jim is survived by sister, Ruth Jeanne Slemon-Froud of Oshawa and brother, Dr. John Robert (Jack) Thompson of Shanty Bay, as well as many loving relatives and friends. We extend a special thanks to friends Darlene Horsley, Richard Hurst and John Howard who have been so helpful and caring over the years. In addition, we are very grateful for the kindness shown by Dr. DePetrillo and the staff at the West Lincoln Hospital.

Cremation has taken place. There will be a Celebration of Life for family and friends at Ben Rockwood, 3970 Tintern Road on December 29th at 11am.

A Memorial Tree was planted for James
We are deeply sorry for your loss ~ the staff at Tallman Funeral Homes - Vineland
Join in honoring their life - plant a memorial tree
Share Your Memory of
James
Upload Your Memory View All Memories
Be the first to upload a memory!
Share A Memory
Plant a Tree
Admin Login | Website powered by FuneralTech & TA | Privacy Policy | Terms of Use