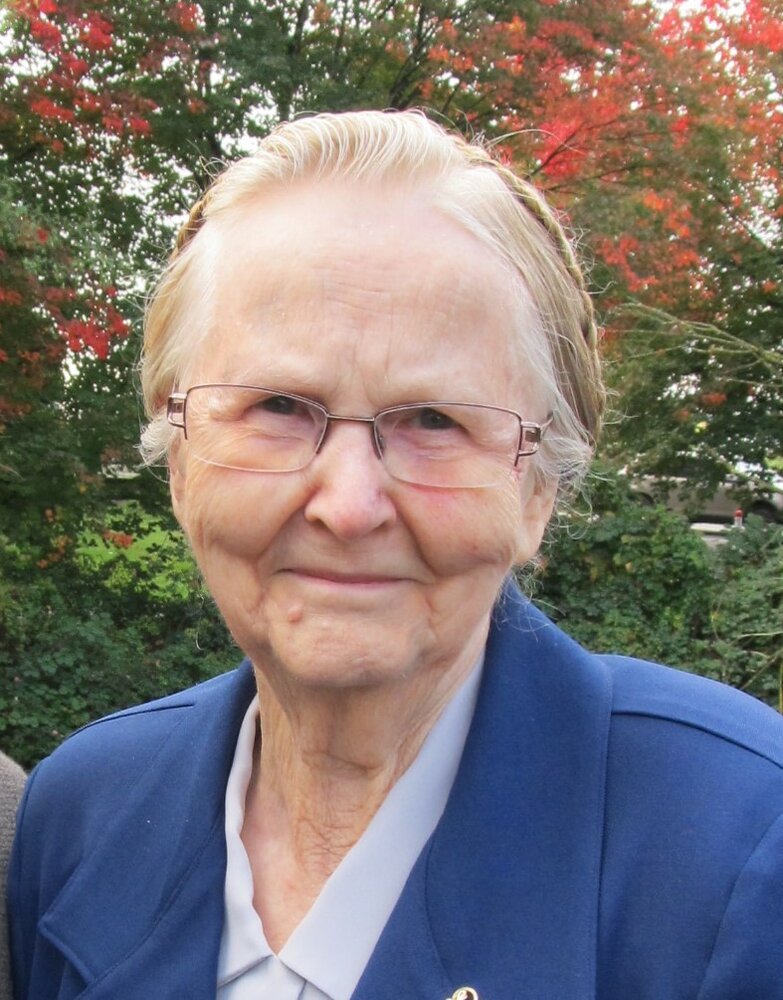 Helena Matz Neufeld was born on April 16, 1930 in Sądy, Poland.  Her parents were Heinrich and Martha (Balzer) Matz.  She had 1 sister Marta and 3 brothers, Aleks, Henry and Willi.

She spent her childhood years in Deutsch Kazuń until the Second World War broke out in September of 1939. Germany invaded Poland and her father was conscripted into the German army and deployed to France.  As the Russian army advanced and came closer, her mother had to make the painful decision to leave everything and flee with her children so as to try and stay ahead of the Russian army.  So, in July of 1944, they packed a few meager necessities and started their desperate flight towards Germany.

For over a year they wandered around trying to avoid being apprehended by the Russian military.  They heard about a MCC camp for refugees in the U.S. zone in Berlin.  Peter and Elfrieda Dyck were the directors of the camp and when they arrived, they were taken into their care. They were in Berlin for four months as they waited patiently for MCC to get them all out of this war-torn place.  After months of waiting, they heard, “It is time. Get ready to leave. The train is waiting.”  They finally arrived at Bremerhaven where their ship was waiting to take them to Paraguay.

Her family arrived in the Chaco, Neu-Mölln, Paraguay on March 3, 1947.  There she met and got to know a young man by the name of Heinrich Neufeld.  On January 15, 1949 she married her beloved Hein Neufeld of Neu-Mölln. Due to a shortage of work, they made the decision to move to Neu Halbstadt in the Neuland Colony. Here the Lord blessed them with 4 children; Hilda, Rudi, Agnes and Johanna.

In April of 1959, the family immigrated to Canada. The first 2 ½ years she lived in Coaldale, Alberta. In August 1961,the family moved to Virgil, Ontario. She was a member of Virgil MB Church (Cornerstone Community Church).

In 2008, Helen & Hein were able to celebrate their 60th anniversary with all children, grandchildren and great grandchildren. The Lord blessed Helen and Hein with nearly 64 years of marriage, less 24 days. Then the Lord called her beloved Hein to his eternal home.

On October 13 she was given the diagnosis that she had pancreatic cancer.  She said, “I am at peace…this is God’s plan for me and I accept it.”  Helen’s one last wish was, she wanted to die at home.  Her children were able to make that happen for her.Helen went home to be with her Lord, surrounded by her family onDecember 28, 2022 at the age of 92.

Helen prayed tirelessly for her children, grandchildren and great-grandchildren. Her one desire and prayer was to see each and every one of them follow in the footsteps of the Lord so as to be reunited again one day.

She was predeceased by her husband Henry, daughter Agnes and brothers Aleks & Willi Matz.

In lieu of flowers donations can be made to MCC.

A Memorial Tree was planted for Helen
We are deeply sorry for your loss ~ the staff at Tallman Funeral Homes - Vineland
Join in honoring their life - plant a memorial tree
Share Your Memory of
Helen
Upload Your Memory View All Memories
Be the first to upload a memory!
Share A Memory
Plant a Tree
Admin Login | Website powered by FuneralTech & TA | Privacy Policy | Terms of Use