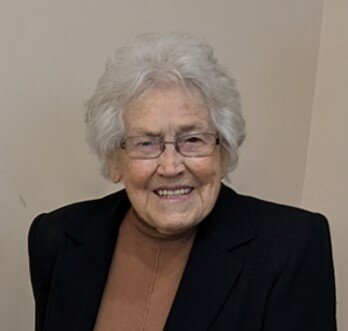 Willemina loved the Lord with all her heart and always gave God the glory, never seeking praise or attention herself. She believed that the Lord Jesus, the Son of God, came to this earth to lay down His life for her sin, and the sins of all who put their trust in Him. She fully rested on the hope of eternity with her Lord and Savior.

Wilhelmina married Theodorus Lievers in 1950 in Enschede, the Netherlands and they were blessed with a son, Ben in 1952. They immigrated to Hamilton, ON Canada in 1953 and were blessed with a daughter, Corry in 1956. They moved to Grimsby in 1992 where the Lord called Theo home after an extended decline into Alzheimers. Wilhelmina continued to live independently in Grimsby until 2016 when her vision declined, necessitating a move to Viva Retirement Community in Mississauga, a residence closer to her son.  Her life and deportment continued to radiate her love of the Lord until the Lord chose to promote her to glory on Jan. 19, 2023 after a very brief illness.

There will be a visitation at the Tallman Funeral Homes in Vineland (3277 King st) on Sunday January 29, 2023 from 4 to 7 pm. The public is invited to the visitation.

A private family funeral and interment will take place at Tallman Funeral Homes in Vineland and Vineland Cemetery at a later date.

Memorial donations can be made to Believers Bookshelf, Canada

A Memorial Tree was planted for Willemina
We are deeply sorry for your loss ~ the staff at Tallman Funeral Homes - Vineland
Join in honoring their life - plant a memorial tree
Share Your Memory of
Willemina
Upload Your Memory View All Memories
Be the first to upload a memory!
Share A Memory
Plant a Tree
Admin Login | Website powered by FuneralTech & TA | Privacy Policy | Terms of Use