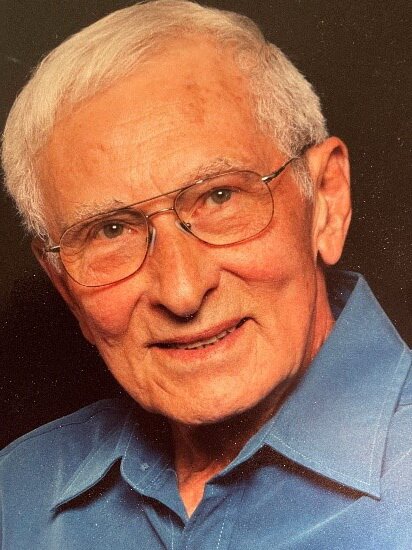 Edwin Gordon Andres – loving husband, father, and Opa - passed away January 21, 2023, at the age of 89.  He will be dearly missed by his beloved Martha, his wife of 65 years, his children Ken, Bev, Dale (Monica), Glenn (Kristine), his grandchildren Cameron, Amélie and Everett, and step-grandchildren Jess and Leigh.  He was predeceased by his son Brian, his brothers John, Jack, Abe, and Henry, and sisters Annie and Esther. He is survived by his brother Harold and sister Irene. Edwin leaves behind a loving extended family and many friends.

Edwin was born on June 9, 1933, in Langham, Saskatchewan to Isaac and Elizabeth Andres and was the middle child of 9 siblings. The family moved from Langham to Jordan Station, then to St. Catharines, then to a farm in St. Davids and then settled in the hamlet of Virgil where the family resided until his mother’s death.

After receiving a B.A from Tabor College in Kansas and Master of Education degree from Western Washington State University, Edwin began his career as a science teacher.  He will be remembered fondly by the many students he taught and mentored at high schools and universities across Canada.  Edwin cherished his family, and he also loved to read, sail, curl, ski and spend time outdoors. He was particularly proud of the home that he built in Huntsville, Ontario where Martha and he moved to after retirement.

Edwin’s strong faith in God sustained him and his family, and he will be remembered fondly for his corny jokes, his long stories, his work ethic, and for pouring his heart and soul into everything he did.

A memorial service will be held Saturday January 28, 2023 at Immanuel Baptist Church, 605 Vine St., St. Catharines at 11 am. Interment at Niagara Lakeshore Cemetery with light lunch to follow at the church.

In lieu of flowers, memorial donations can be made to the Canadian Cancer Society at www.cancer.ca

A Memorial Tree was planted for Edwin
We are deeply sorry for your loss ~ the staff at Tallman Funeral Homes - Vineland
Join in honoring their life - plant a memorial tree
Share Your Memory of
Edwin
Upload Your Memory View All Memories
Be the first to upload a memory!
Share A Memory
Plant a Tree
Admin Login | Website powered by FuneralTech & TA | Privacy Policy | Terms of Use